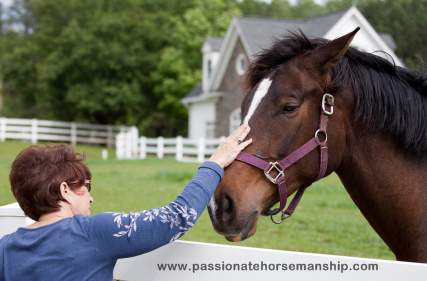 Body Language
The first thing we’re gonna talk about is body language. Now, body language is really important when working with a horse. When you approach a horse and they can see or hear you … They’re trying to decide, “Do I want to run or do I wanna stand here and wait?”

You’ve gotta be very careful about your body language, because whether you know it or not, you are training that horse even if you aren’t directly handling them.

Let me give you an example. I’ve seen this happen many times. Let’s say you have a horse that when you go to feed the horse starts pawing. It is digging and digging and digging. You think, “Oh, my gosh. I gotta hurry up. I gotta get the hay to this horse so it will stop this pawing.”

What people usually do is, “I gotta hurry up and throw this horse some hay.” Well, guess what? You are rewarding that behavior by throwing the horse hay and they will continue doing that. You can stop this behavior using positive reinforcement it’s something that I use in my training program and by using it correctly you can get the horse to stop pawing.

Again, like I said, any time you’re around your horse, whether you’re directly handling ’em or not, you are training your horse. Be very aware of your body language.

You also have to become aware of your emotions and how you are feeling. In the past, there were times when I had a really bad day at work and brought that home with me. I was either really upset from what my boss had said, or maybe what a coworker said.

When you get home in the evening you want to be with your horse. But you go out there, and you start messing with your horse and think, “I’m gonna do a training session.” But yet you’re still harboring this anger from that day. Your horse can tell that.

Without knowing it you’re really tense in your body language. Your horse senses that. They are very, very sensitive to the energy that you put out, so you’ve gotta be very careful. If you’re really that upset it would be best not to do any training that day.

Just go out and love on them relax and calm down. Do some deep breathing around them. Horses love that because then they realize that you’re relaxing, and they’ll tend to relax. But if you’re tense and you’re upset, they’re gonna feel that, so you’ve got to really be aware of your emotions when you’re working with your horse.

Learning to read your horse’s body language is really important, too. I know when you’re first starting out, there’s a lot to learn about body language. I love having a herd of horses you learn a lot.

I have six horses, and you can watch ’em interact with each other. That’s what’s so neat about it. Every morning I turn them out on the hay. I have a mare who is the boss of everybody except for this one gelding that I have. He is the boss over everybody, but she’s always the first one in to eat.

She’ll run to the hay and then she runs around the outside, chasing everybody off except for that gelding. She won’t chase him, but everybody else she chases off. Now, when she comes to one of the other horses she gives them a look maybe puts her ears back or snakes her head out there.

That’s why you’ve gotta be aware of that body language because it’s something that’s gonna help you and keep you safe. As another example, if you had a new horse and you were brushing this horse, let’s say under the belly, you’ve gotta watch what they’re doing.

You start brushing and that horse turns around gives you the look flinches, and puts his ears back a little bit, it may say, “Hey, I don’t want you touching me there.” Sure, we’ve gotta be able to touch our horses everywhere, but maybe there’s a sticker there.

Maybe they have a wound there or they got poked on something. But you’ve gotta pay attention to that because if you don’t, you might get kicked or you might get bit. So, again, that’s the importance of learning the body language of the horse.

But we have to be aware of our body language because little subtle things that you do with your body can cause that horse to do certain things.

The next thing is training. When you’re training your horse, do a gradual process. Don’t think, “Okay, I’m gonna hurry up and train him or her for this.” Let’s say it’s teaching ’em to back. Well, you don’t wanna teach ’em three steps and say, “Hey, that’s good enough.”

Now I’m gonna teach them to move their hind end around.” Don’t do that. You need to go slow. Let the horse learn and soak that in, because I’m telling you, if you rush the training process, you’re gonna have holes later on in your program, and it could show up as bucking, bolting, biting, any of those things.

So, take the time the horse needs. Don’t rush the process. Let them think about what you asked them to do. I love using positive reinforcement because my horses show me, “I understand what you’re asking of me,” because they offer the behavior.

I am not forcing them to go back. They’re saying, “Let me show you I can back up.” I truly know that they understand that, and that is the coolest thing about using positive reinforcement. Now, when I move on to the next task, always add little subtle changes to it.

Don’t go for something big. You wouldn’t take your kid from kindergarten to college, so you’ve gotta think about it in those terms and break things down into simple steps because you always wanna set your horse up for success. Because if you don’t, you’re gonna wind up frustrated, and your horse is going to wind up frustrated. So, take the time the horse needs.

Yes, I’ve seen some people that are supposed to be leaders and they think that the only way to be a leader is by fear. I’ve seen some trainers do that. They like to put the fear in a horse. “You do what I tell you to do or you’re gonna get whacked.” That horse is always really watching. They don’t wanna get out of line.

That’s not the type of trainer that I am. I want my horse to trust and respect me, and respect does not mean fear. Being a leader does not mean being dominant. It’s “I am gonna show you the way. You can trust me; I’m not gonna take you anyplace to get you hurt.” That is what a leader is.

The thing is, you have to be consistent when you work with horses. That’s how they start seeing you as a leader. You cannot be … One day, let’s say that you have a horse that rushes through the gates. You can’t take the horse and say, “Today, you’re gonna stop here and you’re not gonna run through this gate.” Then the next day you go, “I’m just tired today. I don’t care; I’m just gonna let him run through the gate.”

You just let him run through the gate, and maybe the next day the same. Then Thursday you go, “This is ridiculous. You’re not running through the gate.” You cannot do that. You have to stay consistent in everything you do with horses, and they will see you as the leader.

Now, if you have a horse that is already a leader, sure, that can be a little bit challenging, and especially if you’re not consistent. Again, consistency is the key. You have to watch the little things because the little things can turn into mountains of problems, so you’ve gotta nip those little bitty things right away when they start happening so they don’t turn into the big things.

If you have any questions about your horse click the link below and set up a time to talk to me there is no obligation I just want to help you. Click HERE to book an appointment.

I received an email this morning with a video link talking about body language. While this is not about working with horses it is about how powerful body language is. In this video Amy Cuddy a professor and researcher at Harvard Business School talks about how we can change our own body chemistry simply by changing body positions….

So you’ve gotten a horse and now you need a trainer? You know finding the right trainer will depend on your goals with your horse. Do you plan on competing or are you just wanting a horse to go trail riding on? Make sure you spend the time it takes and do your research because…

Is your horse afraid of plastic bags? Have you ever seen people tie plastic bags to their horse or the saddle to get them over the fear? Don’t do this to desensitize them it can cause a lot of emotional and physical problems. I’ve seen people do this to horses in hopes of getting them…

Too many times I see people jump in and immediately start training their horse before they get to know them. Horses are like people with their different personalities, likes, and dislikes. You’ll benefit greatly by taking time to see what their personality is like and observing other things about them like their habits. Taking Time…

I’m sure you’ve heard it before don’t pat your horse! If you’ve not heard it before you will eventually. Some people feel that patting a horse is offensive to them and I agree if it’s a slap. No one likes to be slapped, but patting is different. I remember growing up my grandmother would pat…

There are those that think pressure should not be used with horses as they view it as a bad thing. Pressure is something that horses experience everyday of their lives whether it be physical or mental. Just watch a herd of horses and you will see they pin their ears at each other which is…