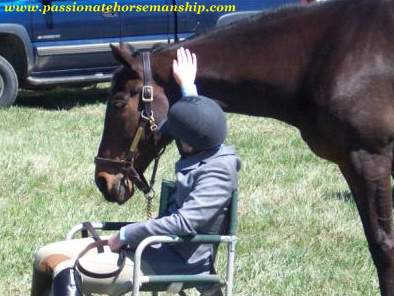 I’m sure you’ve heard it before don’t pat your horse! If you’ve not heard it before you will eventually. Some people feel that patting a horse is offensive to them and I agree if it’s a slap. No one likes to be slapped, but patting is different. I remember growing up my grandmother would pat me gently on the back and it was so comforting.

I don’t believe the horse finds it offensive if you pat them gently. I recently had to do this with a stallion that I own in order to desensitize him.

I purchased this stallion from a breeder that does not handle their foals so he came to me as an untouched 2 year old. After working with him for several weeks using positive reinforcement I was able to get a halter on and off of him. I worked with him in his pen because at times he would get spooked and try to bolt away from me and I sure did not want to take a chance of him getting away from me and running off.

After a few months he started bolting away just as I was about to get the rope halter tied on him. The first time he did this I thought maybe he got scared of something. I don’t like them doing this because they soon learn you can’t hold them and it becomes a bad habit. After the second time he bolted away I knew I had to do something different to stop this behavior.

This is what I did to help him overcome the behavior. I put his hay in a large muck bucket and went into his pen and then put the bucket down in the middle of the pen and stood there. When he approached and would allow me to touch his head I gave him a bite of hay. I did this for several days. After he was comfortable with me touching his head I then started touching his neck from both sides.

When he was accepting of me touching him on both sides of the neck I then went to waving my hand around in the air. I did all of these steps over several days as I was building up his trust and desensitizing him to all of this. Next I moved to petting him with a short rope draped over my arm so he could get used to that.

There were several other things I did before I was able to get the halter on him. I knew it was going to take time with him in order to get the halter back on him so he would not bolt. I had no intention of pushing him and had it in my mind that I would take the time he needed.

You see you have to break things down into simple steps and take the time the horse needs in order to build their trust. I also found that gently patting him on the neck built his confidence and now I am able to put the halter on him without him bolting way as he is no longer worried about things.

Are you having problems with your horse? Let me help you out schedule a private or video lessons with me today. 325-261-3360

11 thoughts on “Patting A Horse”