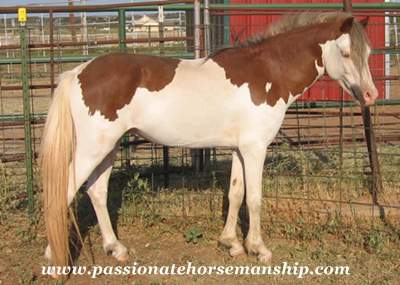 I’m sure some of you have had this happen before where a horse picks you. It is truly an awesome feeling. The horse you see in the picture is a Section A Welsh pony stallion. I had no intention of buying him but he picked me so I took him home.

When I decided to get a Welsh pony stallion I did my research and found a Section A stallion I wanted he was a sorrel with a blaze face and 3 white stockings.

I drove 5 hours to see this stallion and when I arrived I was taken out to the pasture where he was with several other young stallions and geldings. The herd was at the pond standing under a tree. We parked up on a little hill that was close to the pond. There was 4 of us in the car and we all got out.

I was standing there looking at the one had picked out from the website and noticing the others in the group too. I wanted to give them a little time to get comfortable with our presence and hopefully they would move around some as I wanted to see this young stallions movement. Now just a little insight these ponies had not been handled much at all so they were standoffish.

I decided to squat down and get in a more comfortable position. It was not long before I felt what I thought was someone touching me on the shoulder. I turned to see who it was and it was the stallion you see in the picture above.

I knew right then that this stallion was going home with me as he had left the herd. Out of all the people he could have went to he picked me. I asked the other people if he had come up to them and they all said no he went right for you.

This is the interesting part after I got him home I let him settle in for a few days then I went to work with him. Now he had never been in a stall with a run before as he was born out in the pasture and that is where he stayed. This stallion acted like he had been born in a stall at my barn, he was so willing to work with me. Like I said before this was such an awesome feeling.

So tell me have you ever had this happen with a horse before? If so leave me a comment and tell me about your experience.

The tools you will need for Clicker training a horse is a Clicker and a Target. The clicker is a small plastic box with a metal strip that makes a very distinct sound when pushed. I always recommend that people use a clicker to start out with because the sound is unique, later…

[audio:https://passionatehorsemanship.com/wp-content/uploads/2012/01/ExtingushBehaviorsMary.mp3|titles=Extinguish Behaviors] Recently I was asked this question “I taught my horse to back for treats and he’s been backing away from me ever since! I had to ignore backing and treat him for coming forward. Lately I taught him to pick up his feet on a hand signal, only now he’s picking his feet up all…

So you’ve decided that you really want a horse. It does not matter if you are new to horses or you are getting back into horses after being away from them for several years. Create a plan and ask yourself the following questions.   What do I want to do with my new horse? Do…

I really like Dr. Ward’s Five-Element typing for horses it makes a lot of sense. As a trainer I feel it is so important to recognize that each horse is an individual and they all learn differently. When working with my clients and their horse’s I always take into consideration the different personalities and how…

Leasing is a great way to “get your feet wet” without making a long term commitment to see if horse ownership is for you. The lessee will have the responsibility of the horse without the initial investment of the purchase. For a child wanting a pony it is a great way to allow them the…

There are a lot of things to consider before buying a horse. Do you know what it takes to buy (and keep) a horse?  Are you are looking to get a horse, or get back into horses? Did you watch a movie about a horse that inspired you?   Did you read an article about how…